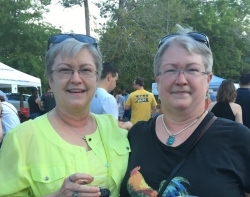 Twin sisters Marlene Thomas and Darlene Reeves of Pinehurst have always shared. Not only do they share the same physical features and the same dental hygienist job (one works three days a week and the other two, then they switch), but they also experienced similar types of cancer.

In May 2013, Reeves was diagnosed with stage 3C primary peritoneal carcinoma, a type of cancer that can originate from the same type of cell that lines the surface of the ovaries and fallopian tubes. She was successfully treated and is now back in the dental hygienist chair.

Since they share the same DNA, Thomas decided to get checked out and underwent a hysterectomy in April 2014. Given her sister’s history, Thomas’ gynecologic oncologist, Dr. Michael Sundborg of FirstHealth Outpatient Cancer Center, analyzed the removed ovary and uterus and found stage 3A low-grade serous ovarian cancer. This is less common and aggressive than high-grade types of ovarian cancer but is resistant to many kinds of chemotherapy and carries a high likelihood of relapse after treatment.

Thomas’ five months of chemotherapy ended in September 2014, and Dr. Sundborg determined her clear of cancer. He told her that her history would make her a good candidate for a new “cancer control” clinical trial sponsored by Gynecologic Oncology Group. The study’s goal was to determine if diet and exercise can help control cancer recurrence in patients who were successfully treated for low-grade serous ovarian cancer. The study hosted two groups — patients in a test group were assigned a life coach who helped patients adopt a healthful diet and exercise regimen and patients in the control group were counseled to continue their normal daily habits and were given a pedometer to track activity. Thomas agreed to participate and was randomly assigned to the latter control group, though she admits she would have preferred to be in the test group with the life coach.

Every six months of the two-year trial, Thomas completed a questionnaire and occasionally had blood drawn at FirstHealth Outpatient Cancer Center that was analyzed by the study’s researchers. Her active participation in the study ended in 2017, but researchers from the Gynecologic Oncology Group call her annually to ask her what’s new with her health, how she is feeling and other general questions. Her consistent response? “I feel alright!” Like Reeves, Thomas is back in their shared dental hygienist’s chair and is enjoying life.

Results from Thomas’ participation in the clinical trial are being analyzed with those of more than 1,000 other participants and overall results are not yet available. While she did not benefit directly from this experience, her participation will help patients in years to come, and she reports that is benefit enough for her.

Now an avid supporter of early cancer detection, Thomas counsels nearly all women she encounters that pap tests don’t necessarily detect all types cancer specific to women. Her advocacy has also earned her a spot on FirstHealth Cancer Services’ Cancer Advocacy Advisory Board for which she volunteers to educate fellow patients about clinical trials from a peer perspective.

Patients and their families seeking more information about clinical trials at FirstHealth of the Carolinas can visit https://www.firsthealth.org/reference/clinical-trials or talk with the patient’s physician.