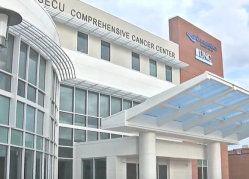 City officials, donors and members of the media got a first hand look at the new SECU Comprehensive Cancer Center at CarolinaEast Medical Center Thursday.

Located on the west side of the Medical Center’s main campus in New Bern, the three-story Cancer Center will offer radiation oncology, medical oncology, nutrition services, social worker and psychological support services, and a palliative care and survivorship program, among other services.

In November 2014, CarolinaEast Medical Center and UNC Cancer Care announced a collaboration to bring comprehensive cancer services previously available only in the Raleigh/Durham Triangle region to the eastern part of the state. Ground was broken on the 80,000 square feet, $37 million Cancer Center in January 2017. The first floor features a radiation oncology clinic and treatment areas, an infusion suite with six semi-private infusion bays and two private rooms, a specialty pharmacy, a cafe, a boutique with oncology-related supplies, group support session rooms, and palliative care. The Cancer Center’s second floor includes a medical oncology clinic with 12 exam rooms and six patient assessment bays, an infusion suite with both semi-private and private rooms, and a chemotherapy mixing pharmacy. The third floor is devoted to administration offices and an education department with classrooms and computer labs.

Dawn Peele, executive director of the SECU Comprehensive Cancer Center, said the facility would offer patients a “one-stop shop” for cancer treatment that would allow them to avoid traveling long distances to several different locations.

“It’s amazing. It’s been a long journey but it was a worthwhile effort and it’s going to bring something to our community that will have a tremendous impact. We couldn’t have done it without the community. We just had so much support that it’s overwhelming,” said Peele.

New Bern Alderman Jeffrey Odham, a member of the CarolinaEast Health System Board of Directors, said the Cancer Center was the culmination of a years-long process.

“It’s a longtime coming and it was not without its challenges, to say the least. But the staff did a great job getting everything together. This is truly monumental for New Bern, there’s no doubt about that,” said Odham.

“This is one of the most incredible architectural structures I’ve ever been in. If you have to have cancer this is going to be a nice place to go, it’s peaceful,” he commented. “It’s going to be a great asset to this community.”

During a program following the Cancer Center tour, Dr. Ray Leggett, president/CEO, CarolinaEast Health Systems, thanked donors and board members, including the Harold H. Bate Foundation, the SECU Foundation, Champ and ET Mitchell, and Reba Aylward. Leggett also recognized the work of the CarolinaEast staff and spoke about the impact the new Cancer Center will have locally.

“What you’re doing makes a difference in people’s lives. Thank you for your remarkable commitment and for sharing in our vision of cancer care in this region. It’s a proud day,” said Leggett. “I hope none of you ever have to set foot in that building again, but unfortunately some of us sitting here today will need that comprehensive cancer center at some point in the future.”

“He wore it on his sleeve every day that he wanted this to be the finest healthcare facility there was anywhere in the state of North Carolina,” said Hardison. “We have a terrific dedicated staff who have pulled this together and for that we are deeply appreciative.”

Hardison also spoke about the difficulties health care facilities like CarolinEast face in the 21st century.

“We don’t know who’s going to come in the door and we don’t know if they can pay or not, but they get the same healthcare regardless. We spent about the same amount of money on the cancer center as we spent on free healthcare last year for those who could not or would not pay, and we do that every year and it’s a challenge for community hospitals,” noted Hardison.

UNC Health Care CEO Dr. Wesley Burks described the new Cancer Center as an “amazing feat.” He said he had recently gained a new appreciation for the work done by cancer care facilities.

“Two years ago my wife developed breast cancer. She had four surgeries within a year. So I’ve been in a waiting room in a different way than I was three years ago,” he commented. “As a physician and as a leader of the healthcare system, I see things differently now.”

Bibianna Contti, a member of the SECU Advisory Board, said she was excited to have a state of the art cancer care facility in New Bern.

“It just warms my heart to know that my friends and family can stay local right here in New Bern and not go to Chapel Hill or Greenville but stay right here where we can take care of our own,” said Contti. “New Bern needed this.”