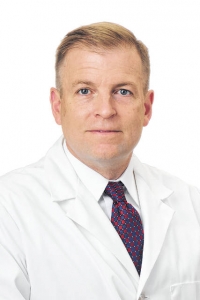 As a young man, Richard thought a career in the financial world would suit him, so he earned an undergraduate degree from the prestigious University of Pennsylvania in economics with concentrations in finance and accounting. However, a volunteer experience proved otherwise.

“After college, I volunteered at the Children’s Hospital of Philadelphia in their bone marrow transplant ward,” Richard said. “This experience solidified my interest and guided me toward medicine, so I pursued the required premed courses at night.”

That chance volunteer experience bodes well for patients in the FirstHealth of the Carolinas service area.

Richard’s premed courses at night progressed to a medical degree from the University of Pittsburgh School of Medicine and an internal medicine internship and residency at Brooke Army Medical Center in San Antonio.

“During my residency, I was drawn to the unique relationships between health care providers and their oncology patients,” Richard said, who subsequently completed fellowship training in hematology and oncology at Brooke Army Medical Center and Wilford Hall Medical Center.

Richard comes to Pinehurst Medical Clinic and the FirstHealth cancer care team from Womack Army Medical Center at Fort Bragg where he served as chief of hematology – oncology service. He also served in a similar position at San Antonio Military Medical Center. Additional military roles include officer-in-charge at the NATO Role 2E Hospital at NKAIA and 31st Combat Support Hospital in Afghanistan, as well as internist at the 28th and 86th Combat Support Hospitals in Iraq. Military honors include the Bronze Star, Meritorious Service Medal, Army Commendation Medal, Army Achievement Medal and Best Senior Resident Teacher, among a host of others. He is board certified in oncology, hematology and internal medicine.

“We are honored that Dr. Richard chose to join our cancer team, as he brings a wide array of experiences and training that will serve our patients well,” said Dan Barnes, D.O., president of the FirstHealth Physician Group. “The addition of another specialist in hematology and oncology allows patients in the Sandhills to receive world-class care in their own community, close to home.”

Richard was drawn to FirstHealth’s “great reputation as a top-notch organization,” he said. “I was impressed by the efficiency of operations and the emphasis on providing high quality patient care. I look forward to developing relationships with my patients and their families.”

Richard and his wife Meredith, a second grade teaching assistant at Saint John Paul II Catholic School, are the parents of five children: Matthew, a junior at the University of North Carolina at Chapel Hill; Alison, a freshman at UNC-Chapel Hill; Daniel, a junior at the North Carolina School of Science and Mathematics; Lillian, a sophomore at Union Pines High School and Joseph, a sixth grader at Saint John Paul II.

Value of Community Based Cancer Care