For more than two decades, Olivera Finn has tirelessly pursued one goal in her research: to develop a vaccine to prevent cancer. She has had this goal since 1989, when her research team discovered the first tumor antigen recognized by a type of immune cell that can kill cancer cells. That antigen—an abnormal version of a protein called MUC1—is produced by the cells of more than 80% of cancer types, including cancers of the breast, pancreas, colon, lung, and prostate.

Although she started her research career as an organ transplant immunologist, the discovery of MUC1 was a pivotal point in Olivera’s career trajectory. “Once we discovered tumor antigens,” she said, “I never looked back.” Olivera received her first NCI grant in 1991 and has been funded ever since to study the biology of tumor antigens and develop them as targets for cancer prevention.

Cancer can take many years—even decades—to develop. Some cancers arise from precursor growths that can be detected by current screening methods. For example, colorectal polyps called advanced adenomas, which can be detected by colonoscopy, can progress to colorectal cancer. These adenomas can be removed surgically, but in many patients, new ones continue to develop and some will become malignant. Olivera’s lab found that the cells of advanced adenomas and the precursors of pancreatic, lung, and many other types of cancer all produce abnormal MUC1 protein.

The presence of abnormal MUC1 on premalignant growths may make it a good target for a vaccine that would prevent their progression to cancer or the development of new precursors. To test this idea, Olivera’s group conducted the first ever clinical trial of a cancer prevention vaccine based on a tumor antigen in healthy people without cancer who were at increased risk of developing the disease.

In the NCI-funded trial, reported in 2013, individuals with a history of advanced adenomas were given an MUC1 vaccine. The vaccine was shown to be safe and to elicit a strong immune response and a long-lasting immune memory. NCI is currently sponsoring a phase II trial testing whether the vaccine will prevent the regrowth of colorectal polyps.

Looking forward, Olivera envisions, “If you are in your 60s and your doctor discovers you are at high risk for cancer, the idea would be to vaccinate to boost the immune system’s ability to keep any abnormal cells in check instead of waiting to see if cancer develops.”

Olivera says that funding from NCI is critical for her research and for cancer prevention research in general. Cancer prevention research is complex, and translating laboratory discoveries into new ways to prevent cancer requires sustained investments over many years—investments that the private sector is often reluctant to make. But “building the evidence that vaccines are an effective way of controlling cancer will go a long way toward getting companies interested,” she said.

The field of cancer immunology has expanded dramatically and has led to immunotherapies for the treatment of advanced cancers as well as vaccines against some viruses that cause cancer. Boosting the immune system to prevent cancers that are not caused by viruses may now be within reach. “The opportunities are amazing,” she added.

For Women with Breast Cancer, Regular Exercise May Improve Survival

Bringing Research to the Community to Reduce Cancer Disparities

What are Clinical Trial Phases? 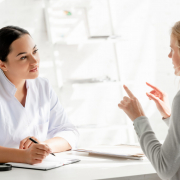 Should You Join a Clinical Trial?