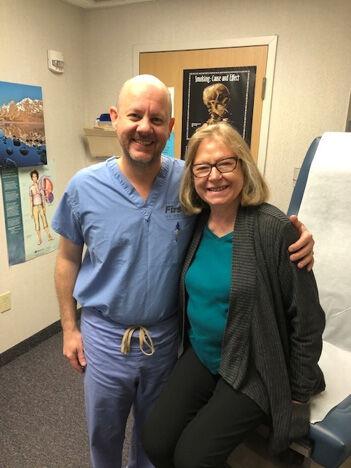 World-class advancements in health move fast in a community known for a slower pace. In early 2019, Pinehurst-based FirstHealth of the Carolinas was chosen as the nation’s first site to host clinical trials for a robotic technology that could diagnose lung cancer earlier, more accurately and less invasively than ever before. That turned into FirstHealth becoming North Carolina’s only provider of the procedure. Then FirstHealth was designated as the world’s first site to train other doctors on the technology. All from a community hospital in the Sandhills.

Jane and Andy Sandor have been married for 56 years and finish each other’s sentences.

“We moved here in 2001,” Andy starts “to be near a great hospital,” Jane finishes. That turned out to be a wise move when the unthinkable happened and nonsmoker Jane was diagnosed with lung cancer in March 2020.

A new technology offered by FirstHealth enabled her to get an early diagnosis — resulting in a greater ability to treat and cure it. The Ion endoluminal robotic bronchoscopy platform is a robotic-assisted, catheter-based technology designed to access hard-to-reach areas of the body through natural openings, like the mouth. When applied in the lungs, it aims to enable early lung cancer diagnoses by accessing and sampling tissue from small nodules in difficult-to-reach areas.

Jane Sandor was the 100th patient at FirstHealth to be diagnosed using this groundbreaking technology.

In early 2020, Jane had the flu, followed by a pain in her side. Her primary care physician was suspicious of a kidney stone and ordered a computed-tomography scan (CT scan) of her abdomen. Jane’s scan indeed found a kidney stone — and more.

Abdomen scans often capture the lower portions of the lungs, and Jane’s scan showed a nodule in her lung. A subsequent CT scan of the entire chest revealed the need for a biopsy to see if it was lung cancer. Although she had never smoked, she previously lived in an area with high levels of radon gas, a known carcinogen.

Jane’s primary care physician referred Jane and Andy to Michael Pritchett, D.O., MPH, a pulmonary specialist at Pinehurst Medical Clinic and director of the Chest Center of the Carolinas at FirstHealth.

“My doctor mentioned that Pritchett has a special way to see and test for cancer with robots,” Jane says. “She said he’s also a good listener, and I appreciated that.”

Using the Ion endoluminal system, Pritchett and his team performed a robotic navigation bronchoscopy to reach, see and snip a sample of Jane’s lung nodule to test it.

To be sure, Pritchett performed the procedure — not a robot — but a robot assisted him to see deep inside the lung and reach the nodule to biopsy it.

Specifically, he inserted a catheter with a tiny camera and instruments into Jane’s mouth and steered the scope robotically all the way out to the nodule. He controlled the instruments’ movements through a console right beside Jane and saw all activity through a high-definition monitor.

“The catheter that the instruments and camera go through is only 3.5 millimeters wide and can easily fit into some of the smallest airways in the lung. More than 70 percent of lung cancer is in the farthest reaches of the lung, so this technology allows us to reach nodules we never could before — and without invasive tactics,” he says.

Before robotic navigation bronchoscopy, Pritchett says to test Jane’s lungs he would have either used traditional navigation bronchoscopy, which may not have reached as far in the lungs, or perhaps refer her to get a CT-guided needle biopsy in which “a needle is inserted from the outside, between the ribs and into the lungs. This has a high rate of lung collapse and we didn’t want her to go through that.”

Also, before this technology, Pritchett says there was no minimally invasive and reliable way to find and biopsy small lesions that often represent early-stage lung cancer — a most frustrating ordeal for both patients and physicians.

“Imagine a doctor telling you that through a CT scan he found a 10-millimeter nodule that is likely early cancer, but he has no way to accurately test it right now, so you’ll have to wait another three months until it gets bigger,” says Pritchett. “That’s absolutely excruciating. But now we don’t have to wait.”

Immediately after Jane’s biopsy — as in right in the operating room with Jane — Pritchett diagnosed her nodule as lung cancer in a protocol called “rapid on-site pathologic examination.”

Armed with that information, he conducted a second procedure, an endobronchial ultrasound, to see if the cancer had spread to her lymph nodes.

“Both of these procedures were completed on the same day under the same anesthesia,” says Pritchett.

After the short procedure, Jane reported a mild sore throat and minor cough, but that was the extent of her discomfort.

Also, the same day, Andy and Jane were able to learn Jane’s initial diagnosis—Stage 1 lung cancer that had not spread to the lymph nodes.

“I was able to share our findings with Jane and Andy that same day and get started on her next steps,” says Pritchett.

A tremendous amount of talent and work comprise the events leading to Jane being named FirstHealth’s 100th patient to receive a robotic navigation bronchoscopy using the Ion robotic system.

The Ion robot is produced by a California-based company called Intuitive. When the Ion’s development was at the stage of testing on patients, Intuitive contacted Pritchett.

“Based on the work that we have previously done in the lung cancer space and at the recommendation of a friend, Dr. Tom Gildea, with the Cleveland Clinic, FirstHealth caught the eye of Intuitive and they asked us to conduct clinical trials here,” Pritchett says.

Applying to be a clinical trial site is no easy task. However, bringing the latest technology to patients in the Sandhills is a top priority for FirstHealth and the team worked together to make it happen quickly. “FirstHealth’s amazing clinical trials team was able to gain approval of the protocol and finalize contracting issues in record time,” says Pritchett, resulting in FirstHealth being the nation’s first clinical trial site for the Ion.

“The clinical trial was also important because it helped us determine if we wanted to purchase the Ion system for FirstHealth after the trial ended — and we did,” says Pritchett.

To date, FirstHealth is the only health care system in North Carolina offering this technology.

Because FirstHealth got a head start on using the Ion, Pritchett has completed more robotic navigation bronchoscopy procedures using this system than anyone else in the world. As a result, Intuitive selected FirstHealth as the world’s first Ion mentor site.

Since August 2019, Pritchett has trained more than 50 physicians from 15 hospital systems across the nation.

“It is such an honor to work with these talented physicians to expand the use of this technology,” he says. “I’m eager to see the positive outcomes we can achieve together for our patients.”

Next Steps for Jane and Others

Jane’s left upper lobe was removed on April 2 by cardiovascular and thoracic surgeon Peter Ellman, M.D., and she was back at home with Andy by April 5.

“A final pathology report proved her cancer was Stage 1, which suggests she has the best possible chance for a cure,” says Ellman. “The fact that Dr. Pritchett was able to reach and biopsy Jane’s nodule so it could be tested at such an early stage made all the difference.”

Pritchett says he and Ellman had many conversations about whether it was the right time to proceed with Jan’es surgery given the current pandemic.

“In the end, cancer doesn’t care about pandemics,” he says. “We at FirstHealth are dedicated to aggressively and safely treating our cancer patients, even in light of this pandemic. Additional safety precautions were taken for the patient as well as for staff. While elective procedures were placed on hold, we don’t consider treatment for an aggressive form of cancer to be elective; therefore, we decided the benefits outweighed the risks and chose to proceed.”

For the next 100 patients and beyond for whom Pritchett uses this technology, he says his goal is to have a fully integrated platform with Ion that works in harmony with additional advanced technologies owned by FirstHealth, including the daVinci robotic-assisted surgery system, also by Intuitive, and the Philips cone-beam CT system.

“Beyond the ability to scope and biopsy lung cancer with this device, in the near future we also expect to be able to treat lung cancer for patients who are not candidates for surgery,” Pritchett says.

FirstHealth is already at the front lines of such therapies, as one of his patients, Sanford resident Terri Cook, was the first American in a clinical trial in which a flexible probe is inserted through the mouth, routed directly to the cancerous lesion and “zapped” with microwave energy. Now more than a year after the procedure, Cook is doing well, and scans reveal no cancer.

FirstHealth’s early adoption of advanced technologies means that “residents of the Sandhills can stay right at home and receive the most advanced care possible,” says Pritchett. “In particular, with FirstHealth’s position at the forefront of lung cancer diagnosis worldwide, patients can receive more advanced care here than they could at a large, academic medical center.”

“It’s scary for cancer to have it hit home, but I feel that I am in good hands here,” says Jane. “People say I should go to Duke or UNC-Chapel Hill, but I politely decline, saying we feel very confident in the doctors and capabilities here at FirstHealth. Yes, Duke and UNC have good doctors, but so do we.”

Getting Cancer Clinical Trials in the Community

Nicole Goolsby is a ‘Hope Cheerleader’ for Patients in Clinical...