From Forbes
August 28, 2019
by Victoria Forster 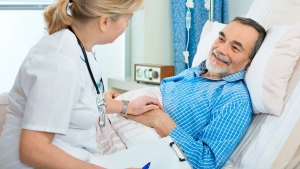 Men with breast cancer make up less than one percent of all breast cancer cases, but they are more likely than women to be diagnosed at a later stage of disease and at an older age, which can make treating the cancer more challenging. However, because the disease is relatively rare in men, they are often excluded from clinical trials to explore new treatments. Now a new document released by the FDA is urging companies to change this and include men in their trials.

“Today we issued a draft guidance encouraging the inclusion of male patients in breast cancer clinical trials,” said Richard Pazdur, M.D., director of the FDA’s Oncology Center of Excellence and acting director of the Office of Hematology and Oncology Products in the FDA’s Center for Drug Evaluation and Research. “When finalized, the recommendations in the draft guidance will provide clarity for industry regarding how additional data to support efficacy and safety for male patients with breast cancer can be generated through a variety of trial designs using different data sources, including studies using real-world data,” he added.

Similarly to women with the disease, the survival rates for men vary depending on a number of factors, such as how early the tumor is diagnosed and whether it has spread from the breast to another site in the body.  But because of a lack of trials involving men, there are fewer approved therapies and men can more quickly run out of options if their cancer stops responding to the limited number of approved drugs.

“I couldn’t find a breast cancer trial in Australia, and there were very few in the US that that guys I know with this disease could participate in,” said Rod Ritchie, a 68 year-old patient advocate for men with breast cancer and a National Breast Cancer Coalition Project LEAD graduate, designed to help train breast cancer advocates. “I eventually recently joined an online study on the use of Tamoxifen which was based in the US and which accepted all nationalities and genders,” he added.

Tamoxifen, which has been credited with significantly improving the outcomes of women with hormone positive (HR+) breast cancer is often especially useful for men, 90 percent of which have HR+ breast cancer according to the American Cancer Society. Tamoxifen is reasonably well studied in men, but for those with hormone receptor negative breast cancer, or who do not respond or stop responding to tamoxifen, there are no other hormone targeting drugs which have been extensively studied in men.

“Pink charities have ignored men for so long and researchers have likely not considered us statistically relevant. Men are currently treated using the results of research on women. Only with access to trials will we know if this is best for us. Once men realize that they’re welcome to participate, and join a study, they will help all men become the beneficiaries of research results,” said Ritchie.

The FDA document is aimed at industry and does not include any set rules for including men in breast cancer trials, so it will have to be seen whether companies developing new treatments take note of the new guidelines and open up their trials to men.

“We hope that the recommendations in the draft guidance issued today will, when finalized, encourage drug development for the treatment of male breast cancer and ultimately, provide additional FDA-approved treatment options for patients,” said Pazdur.

“We need awareness campaigns, especially for those of us with BRCA genes, and we need to de-gender all references to breast cancer. Later diagnoses to leading to poorer prognoses. We’re dying for a change,” said Ritchie.