From www.thepilot.com
October 23, 2020
by Laura Douglass 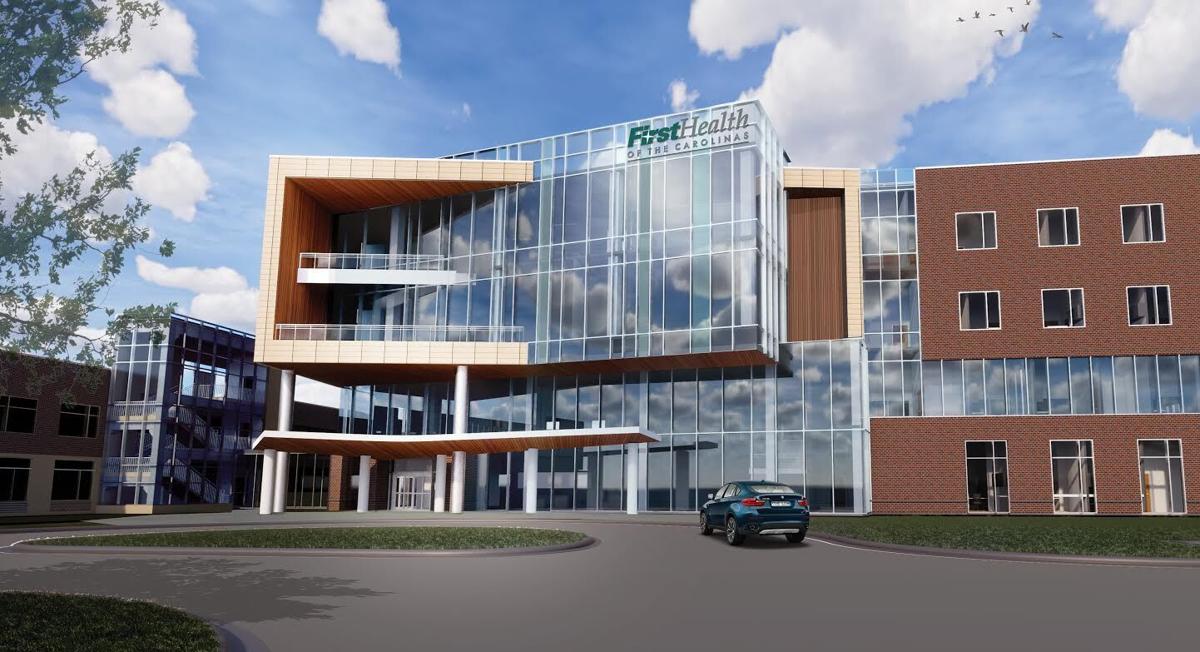 FirstHealth of the Carolinas has approved a key step toward beginning its $68 million cancer center, finalizing interior architectural plans.

“The development of the FirstHealth Comprehensive Cancer Center on the Moore Regional campus is a major step forward for patients and families in our community and surrounding areas who are facing a cancer diagnosis,” said Sherwood Blackwood, chairman of FirstHealth’s Board of Directors.

While FirstHealth has a long-standing history of providing exceptional cancer services, the current facilities have been forced to grow and expand to meet the cancer care needs of the community in a less-than-ideal fashion.

“The cancer center will bring together all outpatient cancer treatments and support services into one state-of-the-art facility offering our community the highest quality and patient-centered cancer care right here at home. On behalf of the FirstHealth Board of Directors, we’re thrilled to support this worthwhile project to allow FirstHealth to advance cancer services in our region and continue to fulfill its core purpose to care for people,” he added. “I’d like to thank the many people; staff, volunteers and donors who have helped make this dream a reality. This facility is a game changer for the thousands of people who are affected by cancer.”

FirstHealth of the Carolinas serves 15-counties in central North Carolina. While the region’s population has grown, so too has the cancer rate.

“We feel this is a good time to build a comprehensive cancer center,” said Firsthealth CEO Mickey Foster. “This brings everything together under one roof. It also gives us the space to give multidisciplinary care for our patients.”

Land clearing is already underway for the parking deck and work should be completed in May. Construction of the center itself will begin about that same time frame and should wrap up in late 2022.

“This is one of the most significant things FirstHealth has done since the Reid Heart Center and FirstHealth Moore Regional-Hoke campus were built,” Barnes said. “We are starting to see the project evolve and everyone along the way is excited and looking forward to the future and what we can offer.”

To help refine the Cancer Center’s initial design, CPL: Architecture erected to-scale versions of various clinical spaces inside an Aberdeen warehouse. This “cardboard city,” as it was nicknamed, let medical providers, staff and FirstHealth trustees walk-through different parts of the proposed building to better assess the functionality of each space before construction begins.

“It allowed us to come up with innovative ideas,” Barnes said. “We had a significant amount of input through the cardboard city. It helped move along the design process even further. The design really is a compilation of the input of all the various stakeholders in the process.”

The life-sized mock-up should also provide substantial cost-savings over time, he added, as fewer change orders are anticipated. The cardboard rooms were detailed all the way down to where electrical outlets would be installed.

“It is a different approach to design. We’d rather make any small changes now rather than later,” said FirstHealth’s project manager, Cindy Hetzler.

Robin Washco of CPL: Architecture said the to-scale model allowed different departments to better understand how the building would flow from one section to another.

“It is easier to envision the space this way,” she said. “Another goal was also to standardize the spaces, such as exam rooms. That works better from an operational standpoint and a budget standpoint as well.”

Foster said developing plans through the use of a cardboard city model is new for FirstHealth, but considered best practice for a modern, large construction project.

“This has to be one of the most well-thought out plans I’ve seen in my cancer center career,” Foster said.

“We wanted to create a place that met everyone’s needs, no matter where they are in their (cancer) journey,” Kuzma said.

Foster said the uniqueness of the fourth floor — set aside for patient support services — also differentiates the facility.

“There is an exercise gym for patients, a meditation space, massage spaces, community classrooms where support groups will meet, a patient resource room, palliative care, and this where the nurse navigators will be. They have one of the most important roles in cancer care.”

As a matter of convenience, the four-story adjacent parking garage will provide 500 parking spots with a drop-off area for patients. On the first floor, the new center will have a bistro cafe with healthy drinks, smoothies and other food options for patients and visitors.

Last year, FirstHealth made history twice: enrolling the first patient into a worldwide trial testing the efficacy and safety of immune therapies designed to battle cervical cancer, and as the first health care system in the nation to participate in a clinical study with Intuitive Surgical’s ion endoluminal system, a catheter-based, robotic-assisted technology.

In recent weeks, Moore Regional Hospital made history again as the first site to enroll a patient into a clinical trial for a new regimen to treat COVID-19 patients. Results from the study could be available by the end of the year, according to Dr. Gretchen Arnoczy, an infectious diseases physician with FirstHealth.

Earlier this year, Moore Regional Hospital was named in the top five of the state’s best hospitals, climbing from an 11th place ranking just one year ago. Perhaps more importantly, the flagship facility of FirstHealth of the Carolinas, along with Moore Regional Hospital-Hoke and Richmond campuses, was also recently ranked No. 4 for “patient picks” according to Business North Carolina magazine.

For more information about cancer clinical trials in your area, click HERE