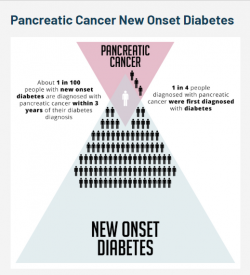 The National Cancer Institute is leading a project to create a cohort of people who are newly diagnosed with diabetes in the hopes that this group, who are at increased risk of developing pancreatic cancer, provide the clues in their blood and tissues to unravel some of the unknowns about this highly fatal cancer. The New Onset Diabetes Study (NOD) will include 10,000 people ages 50 to 85 across the United States.

Diabetes is a disease that occurs when your blood glucose is too high. The hormone insulin, made by the pancreas, is responsible for regulating blood glucose, so having diabetes signals a problem with the pancreas.

NCI, in partnership with the National Institute of Diabetes and Digestive and Kidney Diseases (NIDDK), funded the Consortium for the Study of Chronic Pancreatitis, Diabetes and Pancreatic Cancer (CPDPC). The NOD study is a critical part of this project to gain insight into the pathophysiology of chronic pancreatitis and its associated illnesses: chronic pain, pancreatic insufficiency, Type 3c diabetes and the diabetes/pancreatic cancer association. The multidisciplinary teams are also studying the development of pancreatic cancer in newly diagnosed diabetic patients.

Over 90% of pancreatic cancer is sporadic, meaning it occurs in people without a family history of the disease. It is both relatively rare (about 3% of cancers diagnosed in the U.S.) and very deadly (fewer than 10% of those diagnosed live more than 5 years). There is no identifiable high-risk group for sporadic pancreatic cancer, few high-quality biospecimens are available to conduct tests of biomarkers, there are few biomarkers of early detection to test, and no imaging techniques to find pancreatic cancer early in its development. Finding ways to identify this cancer early is critical to learning how to prevent it and to be able to treat it in earlier stages.

An estimated 30.3 million adults in the United States have diabetes (9.4% of the US population), and while 23.1 million know their diagnosis, another 7.2 million are not yet diagnosed. About 84.1 million adults—about 1 in 3—have prediabetes, which usually occurs in people who already have some insulin resistance or whose beta cells in the pancreas aren’t making enough insulin to keep blood glucose in the normal range. These people have a 50% chance of developing diabetes over the next 5 to 10 years. The information gained from NOD could benefit these people.

“NOD will play an important role in addressing these challenges,” said Jo Ann Rinaudo, PhD, a program director in the NCI DCP Cancer Biomarkers Research Group who is involved in NOD. This prospective cohort of subjects >50 and ≤85 years of age with new onset diabetes (NOD) is being recruited, with the goals of:

The NCI Community Oncology Research Program (NCORP) is participating in creating the cohort, via Community Sites in California, Michigan, and Washington.

The CPDPC is holding their Biannual meeting in Bethesda, MD on December 9-10, 2019.