Breast cancer patient Sharon was diagnosed with triple-negative invasive lobular carcinoma after she found a lump after working out. Watch as she shares her breast cancer journey through two stages along with treatment – and what she learned and experienced with clinical trials and her advice to other patients. In Sharon’s words, “I do think that patients should be given all of their options upfront. I don’t think that clinical trials should be the last resort.” 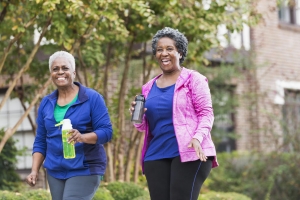 Getting regular exercise may increase how long some women with breast cancer live, results from a new study show. Credit: iStock

Getting regular exercise may increase how long some women with breast cancer live, results from a new study show. Women who engaged in regular physical activity before their cancer diagnosis and after treatment were less likely to have their cancer come back (recur) or to die compared with those who were inactive, the study found.

The study was unusual in that it collected information on the physical activity levels of women with high-risk breast cancer (cancer that is likely to recur or spread) at multiple time points—shortly before their diagnosis, during chemotherapy, and after completion of treatment.

These results “provide evidence that physical activity at any point in time appears to be beneficial for breast cancer survivors,” said Joanne Elena, Ph.D., M.P.H., of the Epidemiology and Genomics Research Program in NCI’s Division of Cancer Control and Population Sciences (DCCPS), who was not involved with the study.

“This study gives us further evidence that being more physically active after a diagnosis of breast cancer is one of the ways that breast cancer survivors can take matters into their hands and improve their health and decrease their likelihood of dying,” said Kathryn Schmitz, Ph.D., M.P.H., an exercise oncology researcher at the Penn State College of Medicine, who also was not involved with the study.

The new study was published April 2 in the Journal of the National Cancer Institute.

Looking at Exercise Over Time

The physical activity analysis by Dr. Cannioto and her colleagues included 1,340 patients from the SWOG trial who also enrolled in the DELCaP study. Participants completed questionnaires about the type, frequency, and duration of recreational physical activity they engaged in at four time points: during the month before diagnosis, during treatment, and at 1 and 2 years after study enrollment. Participants were followed for up to 15 years or until death, with a mean follow-up time of 89 months (7.4 years).

Using the questionnaire responses, the researchers determined whether participants had met the minimum 2018 Physical Activity Guidelines for Americans at each time point. The guidelines recommend that adults engage in at least 2.5 to 5 hours of moderate-intensity physical activity or 1.25 to 2.5 hours of vigorous-intensity aerobic physical activity per week.

Among patients who did not meet the guidelines before diagnosis but met them at the 2-year follow-up, the chance of recurrence or death was reduced by 46% and 43%, respectively, compared with those who did not meet the guidelines at both times. The finding, Dr. Elena said, suggests that “it’s never too late to start exercising to derive benefits.”

The researchers also performed “time-dependent analyses,” which help to account for the fact that physical activity data was collected over multiple time points,” Dr. Cannioto explained.

These analyses showed that, compared with inactive patients, the likelihood of death from any cause was reduced the most among highly active patients, but even patients who regularly engaged in low levels of physical activity saw a substantial survival benefit.

These findings “are good news for breast cancer patients, who can be overwhelmed by the physical activity guidelines, especially during treatment,” when they may be severely fatigued or in pain, Dr. Cannioto said. However, she emphasized, to achieve optimal health benefits, patients and survivors should still strive to meet the guidelines when they are able.

Although physical activity information that people report themselves is not always accurate, the detailed questionnaire used in this study is likely to provide a better estimate of the amount of exercise that people do than a single question or brief survey would, “giving stronger credence to the findings,” Dr. Schmitz said.

In addition, evaluating the findings according to whether participants did or did not meet the physical activity guidelines, as the study authors did, rather than on how many minutes of physical activity people did each week, is also likely to reduce inaccuracies, said Richard Troiano, Ph.D., also of DCCPS’s Epidemiology and Genomics Research Program.

One limitation of observational studies like DELCaP and the many other epidemiologic studies that form the basis for the latest exercise guidelines for cancer survivors, Drs. Troiano and Elena said, is that such studies cannot definitively prove a cause-and-effect relationship between physical activity and improved survival or reduced risk of recurrence.

That’s because it’s also possible that “the people who feel better are more likely to be able to be physically active than those who are sicker,” Dr. Troiano explained.

Another limitation is that the DELCaP study only had information on patient deaths due to any cause, rather than on deaths due specifically to breast cancer, and physical activity may have less of an impact on breast cancer mortality, Drs. Schmitz and Troiano noted.

Move as Often as You Can, Whenever You Can

“This study comes at a time when we already have national and international physical activity recommendations for cancer survivors, for the purpose of reducing the risk of recurrence and mortality,” Dr. Schmitz said, and the new findings reinforce these recommendations.

It’s important to keep in mind, however, that “physical activity is not the only factor that determines whether breast cancer will recur, and it certainly is not the only determinant of death. It’s just one piece of the puzzle,” Dr. Elena said.

“We don’t want someone to think, ‘If I exercise enough, I won’t have a recurrence,’” she continued. “But if you can add physical activity into your day, it is likely to influence many types of health outcomes for breast cancer survivors.” That includes quality of life, anxiety, fatigue, and the ability to tolerate treatment, as well as the risk of dying.

The bottom-line message for breast cancer survivors, Dr. Elena concluded, is “Move as often as you can, when you can.”