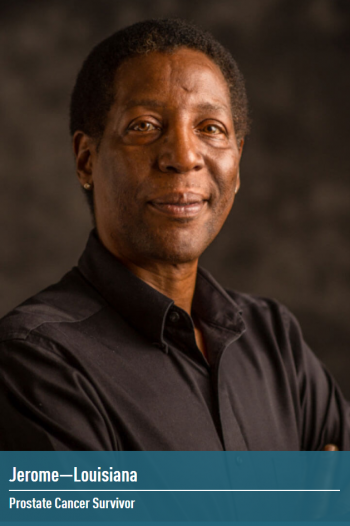 Jerome combines two passions, sports and cooking, when he makes gumbo for his buddies to enjoy as they watch their home team, the New Orleans Saints, play football. When he learned in 2018 that he had advanced prostate cancer, Jerome thought he might have to travel 350 miles for treatment at an NCI-Designated Cancer Center. He worried about missing work days, cooking on game days, and his friends.

However, he learned of an opportunity to join a phase 3 NCI-supported clinical trial offered locally through LSU Health New Orleans’s Stanley S. Scott Cancer Center, an NCI Community Oncology Research Program community site. The trial provides standard therapy for all enrollees, with two arms of the study also testing the efficacy of additional radiotherapy or surgery.

Jerome hesitated to enroll initially. Like many people with cancer, he had concerns about participating in an experimental study. After discussing his concerns with his doctor, Jerome decided to join the trial and was treated with hormone, radiation, chemotherapy, and, in early 2019, surgery to remove his prostate. A few months after a follow-up visit with his doctor, he was ecstatic to hear there was no evidence of disease remaining.

During treatment, Jerome has been traveling only 20 minutes from his house to his doctors. It was a big relief not having to take off work for an unknown time and go a long distance for treatment. “NCORP offered everything I needed,” he smiles, “here in my backyard.”

Why You Shouldn’t Fear Clinical Trials when Faced with Cancer

At NCI, A Robust and Rapid Response to the COVID-19 Pandemic

Accelerating Progress with the Power of Data