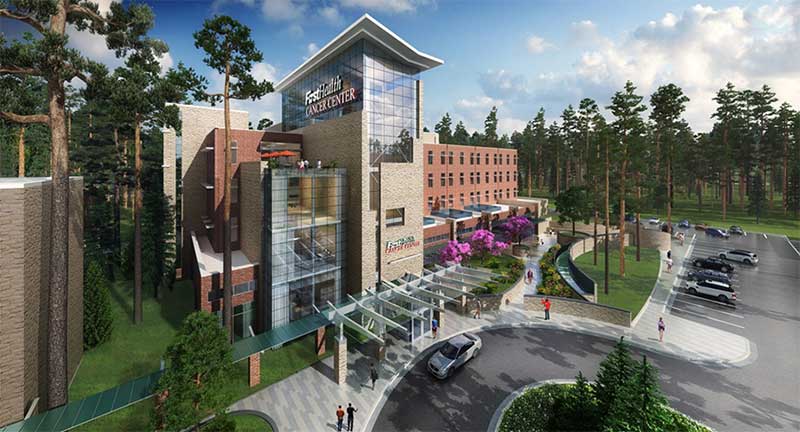 FirstHealth of the Carolinas’ four-story, $60 million cancer center is set to break ground in early 2021 with an anticipated opening in November 2022. The new building, rendered above, will be a one-stop shop for cancer patients to get diagnoses, treatments and therapeutic support.

When Pinehurst-based FirstHealth of the Carolinas opens its one-stop shop cancer center in 2022, the 15-county medical network will have a centralized diagnosis and care center, a headquarters for its clinical trials and a check mark on the to-do list of priorities set by new CEO Mickey Foster.

Construction on the four-story, $60 million cancer center on Page Road North, near Moore Regional Hospital, will begin in 2021 following completion of a four-story parking garage. The target opening date is November 2022. Foster estimates about $30 million for the 120,000-square-foot center will be raised through a philanthropy campaign launching in January. However, people have already been donating to the project since November.

“The rates for cancer in our 15 counties is expected to grow, so we need to build a comprehensive cancer center,” says Foster, who joined FirstHealth in July after serving as president of Moses H. Cone Memorial Hospital in Greensboro. “I have had the opportunity to oversee several cancer programs in my career, and there is a need to have all the support services under one roof. It creates a one-stop shop for care for all of our cancer patients.”

Foster joined FirstHealth with three main goals: “First, we want to be the best place to work in the county. We are in the top 4% nationally [according to Hospital Consumer Assessment of Healthcare Providers and Systems], so we want to create the best culture. Second, we want to be a health system that is a zero-harm organization. There are still too many harm events in health care. We want to be a system with zero: no falls, no injuries, no infections. Third is to build a destination for cancer care.”

“We have outstanding services, but they’re spread out across our campus,” says Dan Barnes, president of FirstHealth’s physicians group and vice president of oncology services. “This [new center] allows patients to be seen from diagnosis to treatment to survivorship and be patient-centered and patient-focused. It allows us to bring physicians and treatment under one roof and increase support services such as financial counseling and palliative care.”

The project received full support from the Pinehurst Village Council and the Village of Pinehurst, Foster says. Space will be reserved for meditation and support groups, as well as rooms designated for exercise. “We want to create a more healing and natural setting that will differentiate us from other places,” he says. “It’s a game changer for cancer care in this region.”

One floor will house research and clinical trials, such as those headed by pulmonary specialist Michael Pritchett, director of the Chest Center of the Carolinas at FirstHealth and an employee of Pinehurst Medical Clinic. Last April, Pritchett was the first in the world to demonstrate work with a robotic-assisted catheter-based device to collect samples for lung cancer diagnosis. Pritchett performed his first procedure last March and as of mid-November, he had seen about 60 cases.

“We have the pathologist sitting in the room, so they put it on a slide, and we get immediate feedback as to whether it’s malignant or not,” he says. “So when I wake you up, we will tell you what we found. We can biopsy multiple lesions, so it’s really a game changer for us.”

The future cancer center’s central location is imperative in reaching the 15-county area beyond the 16,000 people of Pinehurst, Pritchett says. “We don’t want them to drive past us and have to go to Duke or UNC.”

Pritchett isn’t the only one working on research at the new cancer center. On the same floor in the building, gynecologic oncologist Michael Sundborg will continue administering a Gynecologic Oncology Group Foundation trial to assess a chemo treatment for advanced cervical cancer.

Sundborg has two patients enrolled in the six-month trial designed to prompt the immune system to seek and destroy cancer. The GOG Foundation chose FirstHealth to test the therapies in a hybrid trial, meaning it’s sponsored by the National Cancer Institute and is an industry trial, so the medication is free. “We’re shooting smart missiles. We’re a sniper,” Sundborg says. “This is the evolution of cancer therapy.”

Sundborg says Moore County has seen a 7% increase in cancer diagnoses annually, compared with a national average of about 3%. It’s the leading cause of death, according to the 2018 State of the County Health Report. He attributes it to the region’s relatively older population and patients in nearby rural coastal areas without access to care. “But we’re doing something for them. We’re changing life spans.”

Both Sundborg and Pritchett have begun their research in their current roles, but the new cancer center will make “a substantial footprint” in care, Sundborg says.

Foster did not detail the number of jobs that may be created with the completion of the center but anticipates recruiting additional physicians, nurses, support staff and medical-office assistants for the new center. Health care and social assistance are listed by the N.C. Department of Commerce Labor & Economic Analysis Division as the top employers in the county with 9,457 workers, or 26.2% of the total workforce.

“I have plenty of offers all the time to go other places, and I have no desire to go anywhere,” Pritchett says. “I can do all these things, [including] publish research, right here in my own community.”

What are Some Common Misconceptions about Cancer Clinical Trials?

Clinical Trials Program at FirstHealth of the Carolinas Makes History

What is Cancer?Act Seeks to Expand Clinical Trial Access to Patients on Medicaid
Scroll to top